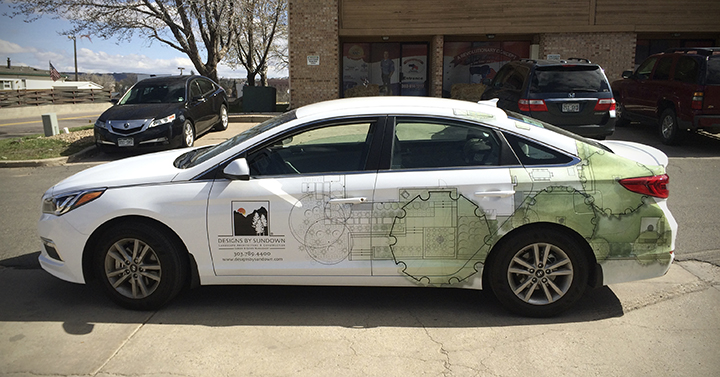 When it comes to car wraps, there are two different categories of wrap films: calendared and cast.

Calendered vinyl is thicker than cast and usually contains a more aggressive adhesive, whereas cast vinyl is highly conformable, “repositionable” and clean-removing. Both categories of films can be used for digitally printed wraps or pre-cured ones. However, at Big Dog Wraps & Graphics we think that calendared films should NEVER be used on car wrap applications.

We’re going to emphasize that point again because it’s one of the most important things you need to understand about wraps: calendared films should not be used to wrap cars. The reason is because calendared films cannot conform to concave and convex curves of cars the same way cast films can. This means that when calendered films are stretched into tight crevices or around curves they might look great at first, but after a few weeks the film will tighten, causing the vinyl to shrink or bubble at the edges.

The unfortunate truth is that there are a lot of car wrap “wannabe’s” out there who are buying calendered vinyl and using them for car wraps. This because calendered films are typically 50-75% cheaper than their cast alternatives. The problem is that the results are very poor which ends up getting the clients very angry (rightfully) and discouraged. Of course, because they don’t understand why their new wrap now looks so terrible. So in these cases, the most obvious culprit is always the wrong product being used (calendered film instead of cast).

Now, you might be wondering about calendered films on flat surfaced-cars, like box trucks or trailers. Sure, the film doesn’t have to stretch as much as it would on a car wrap, but the truth is that calendered films shrink whether or not they’re applied to a flat board or a compound curve. Using calendered films on a perfectly flat box truck with no rivets (do those even exist?) seems like it would be fine but in actuality, it’s not. The panels shrink where they overlap, causing the graphics to not line up after the shrinking has occurred.

Related: Thinking about a vehicle wrap come to Big Dog Wraps and Graphics

AT BIG DOG WRAPS & GRAPHICS WE ONLY — USE THE BEST

BIG DOG Wraps & Graphics uses only the finest brand name premium types of vinyl in the marketplace. Our advanced printing technology means you get a premium, high-gloss finish that emulates a custom paint job. We are proud to use AVERY-DENNISON

brand types of vinyl for your BIG DOG Wrap.

Come and check us out personally or contact us online for a free quote for your fleet graphics and wraps. We are located at 735 Park St. Unit F, Castle Rock, CO 80109. However, if you cannot come to us we’ll come to you. You can also call us at 303-353-1101. We will also help you along the rest of the process using only the best of materials.